West Africa was the location of SRMGI’s first African workshop, held in partnership with the African Academy of Sciences in 2012. We returned to West Africa in August 2019 to co-organise an event in Cotonou, Benin, in partnership with the International Chair in Mathematical Physics and Applications (CIPMA – UNESCO Chair) of the University of Abomey-Calavi. Benin is one of the eight DECIMALS countries, with a large research team researching how SRM might affect the West African climate, especially precipitation and river runoff. The local DECIMALS team played a central role organising and presenting at the workshop, and representatives of the other African DECIMALS projects – in South Africa and Ivory Coast – were also brought in to the event. 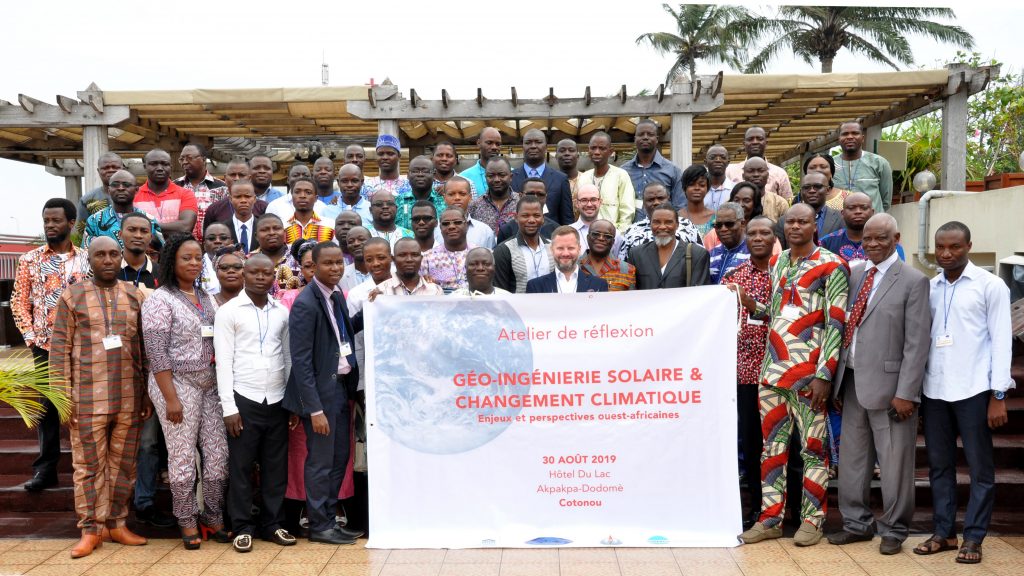 A workshop under the patronage of Marie-Odile Attanasso

The meeting started with opening speeches from Prof. Norbert M. Hounkonnou (President of ICMPA and of the Benin National Academy of Sciences), Andy Parker (Project Director of SRMGI/Degrees), Prof. Baloïtcha (co-PI of Benin’s DECIMALS team and Associate Professor in Mathematical-Physics at the University of Abomey-Calavi), and Prof. Bienvenu Koudjo, Chief of Staff to Benin’s Minister of Higher Education and Scientific Research, Ms Marie-Odile Attanasso.

Andy Parker noted that most SRM research and discussion has to date taken place in OECD countries, and that developing country engagement had been very limited. Developing countries have the most to gain or lose from any decisions over SRM, however, and so SRMGI (The Degrees Initiative) has been trying to build their capacity to critically evaluate SRM: through engagement workshops like this one, and through the DECIMALS research fund.

In his address, Prof. Bienvenu Koudjo reflected on the climate context in which the day’s discussion took place. He lamented that the Paris Agreement temperature targets might be missed. He argued for a rigorous and inclusive conversation around SRM, on the regional as well as one the international stage, in order to understand potential benefits and drawbacks. This conference, he reflected, was a first step in enlarging the debate to more nations, before inviting the participants, on behalf of the Beninese government, to make the most out of this day.

Presentations on climate and solar geoengineering

Following the opening ceremony, Prof. Abel Afouda (Université d’Abomey-Calavi) gave an overview of the local climate context in Benin. After presenting the main climate risks to the region, he highlighted the lack of sufficient data to inform any decisions over SRM: “We make science from facts” he said, before inviting researchers in Benin to join the research effort around SRM. François Pougel (SRMGI/Degrees) then delivered a briefing on the science and the socio-political dimensions of SRM, before Dr Eric Alamou, Co-PI of Benin’s DECIMALS team, presented their work researching the impacts of solar radiation management on the West African climate, in particular looking at precipitation regimes and river discharge. 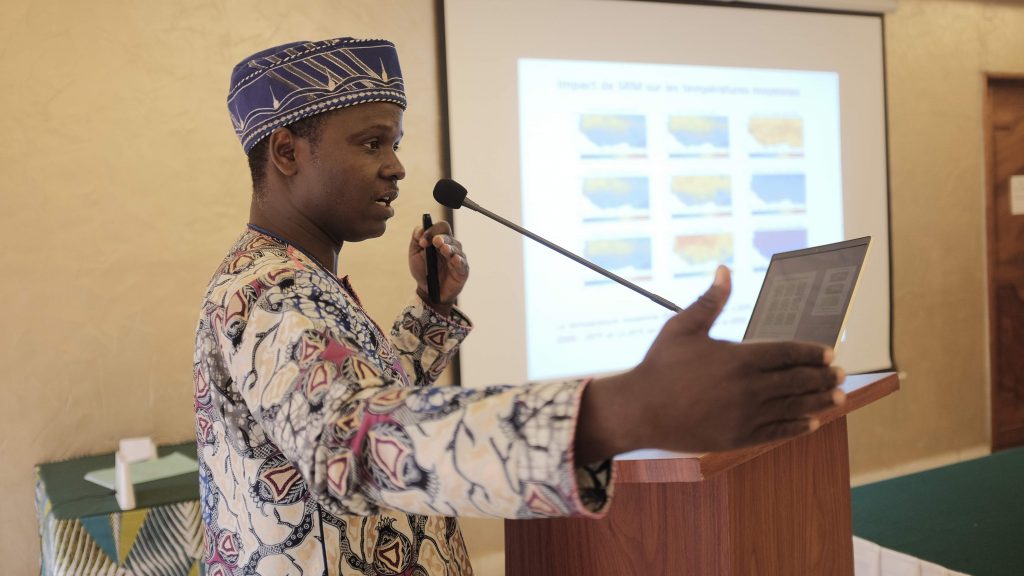 Dr Vissin argued for need to better understand SRM’s impacts on the environment, calling for a strategy to be developed in Benin on the topic and Benin to take a proactive role on the subject.

Prof. Yabi agreed with the need for more research in Benin in order to understand regional impacts – making the point that West African researchers have the best understanding of the regional geography. He underlined how important it is to have basic meteorological data to inform modelling of climate impacts, let alone SRM: “We need to know the reality of things. If we don’t, how do we know if the models are right? We need data for decisions to be made”.. Prof. Yabi also called for more transdisciplinary research, explaining that SRM is a complex field where geography and sociology will be as important as mathematics and physics. “These fields need to work hand-in-hand for high-quality results that will be socially accepted” he said.

Dr Odoulami, a Beninese scientist based in Cape Town, began by recounting the story of the day in 2017 when Cape Town nearly ran out of water due to a severe drought. He explained that even in highly developed areas, and areas with irrigation and water-management plans, climate change can already be a dangerous risk. He made the comparison with Benin, which is highly dependent on precipitation and has much less developed water management systems. He concluded by reflecting on his research: “SRM is a new topic, so it is important for us in the scientific community to understand it in order to be able to brief our decision-makers, so that when the day comes to make any decision over SRM – should it get to this point – they will be in a situation to make well-informed decisions”.

The last panellist, Prof. Amoussou, emphasised that science is not enough to evaluate SRM, and that engagement with a wide range of stakeholders would be necessary for a broad societal conversation. Like Prof Afouda, he argued that more data to be generated in order to support research, without which Benin would lag behind: “data is to science what fuel is to engines”. He concluded by reminding the conference that ECOWAS (the Economic Community of West African States) set a target for its member states to invest 1% of their GDPs in scientific research as part of its 2016-2020 strategic plan. 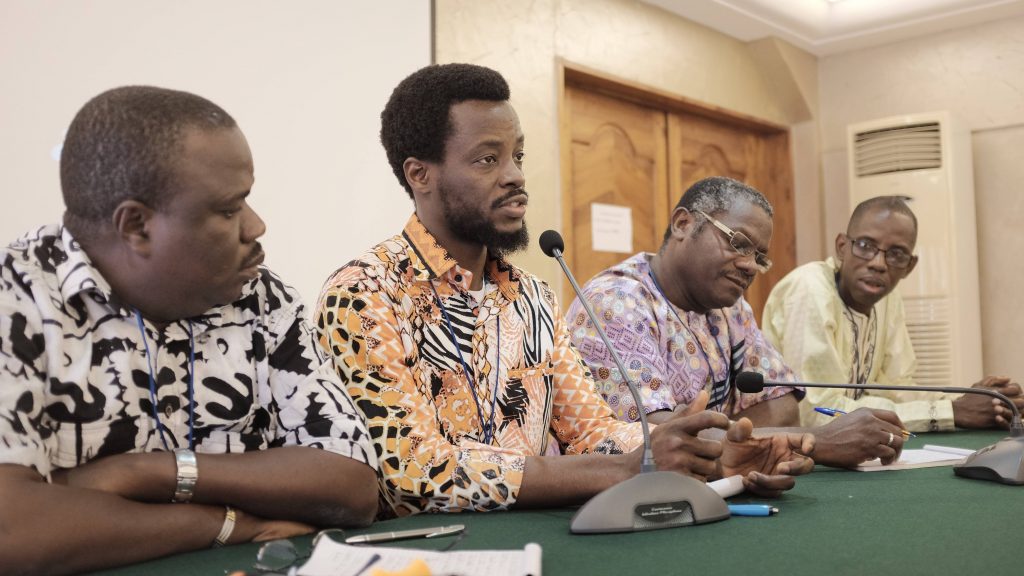 After the lunch break, the participants organised into small groups to address some of the most challenging and pressing issues raised by SRM research and governance.
The groups were asked whether they feared that SRM would distract policymakers in Benin from reducing CO2 emissions, and if so, what they think should be done to address this risk. While several participants voiced concerns that SRM might endanger some of commitments made by Benin at the regional and international level, it was also pointed out that the study of SRM might underline how important it is to cut emissions.

Another question asked the participants if they thought Benin could influence international decisions to accept or to reject SRM. Some of the participants were pessimistic, and felt that only great powers would get a say in whether SRM is ever used. Others disagreed and argued that participating in coalitions was the answer for small states like Benin. Some proposed that Benin should be ambitious, and could lead a coalition of developing countries by leading on the evaluation of SRM.
A third question probed perceptions of a proposed field experiment. Participants were given basic details of field research being planned by a team at Harvard University and asked what information they would need if it was down to them to approve or reject the experiment. This provoked some lively discussion within and between groups. Many people wanted to know much more about physical risks, saying they would only be comfortable if they knew that the experiment would not have dangerous consequences. Others questioned whether anything useful could be learned by small scale research into a global technology. 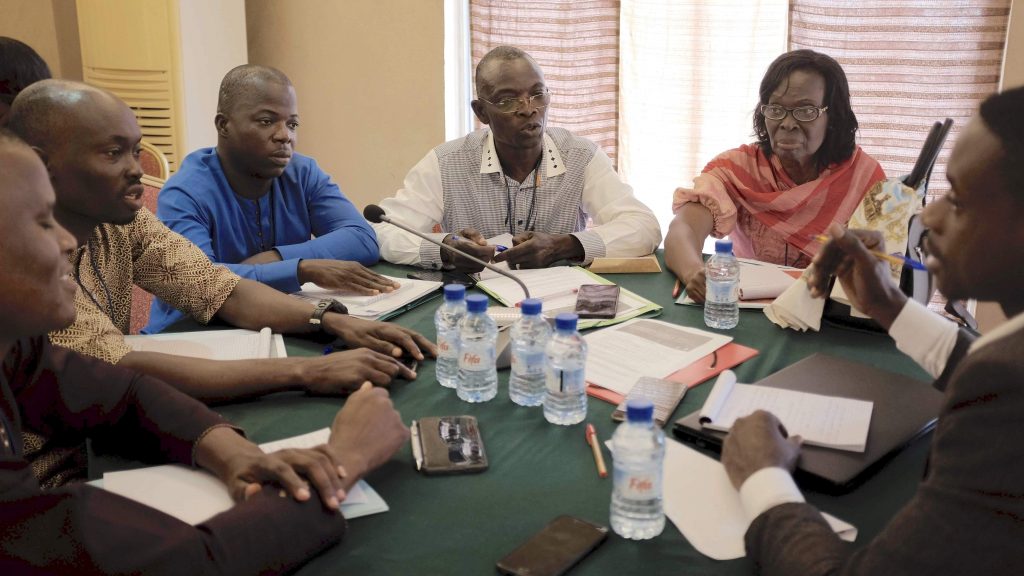 A final plenary session addressed the next steps for SRM research and its governance. Participants said that they were very pleased that Benin was an early African research leader on SRM and people expressed general support for research as a foundation for future decision-making. It was also argued that scientific research alone was not enough – interdisciplinary programmes were needed. Speakers emphasised that there would need to regular communication between SRM researchers and policymakers, and that research results would have to be communicated widely in general. Another recommendation that met with support was a proposal to create an ethics committee dedicated to SRM – modelled on those in medicine and biology and designed to evaluate experiment proposals. One final specific suggestion was that SRM experts in Benin could take part in a sub-committee of the permanent Committee on the Climate and Environment of the National Academy of Sciences, Arts and Letters of Benin (ANSALB) where they could bring their expertise and advice on this approach.

This event was featured on the ORTB and Golfe TV television channels, on the national radio (ORTB) and in the written press (La Nation).