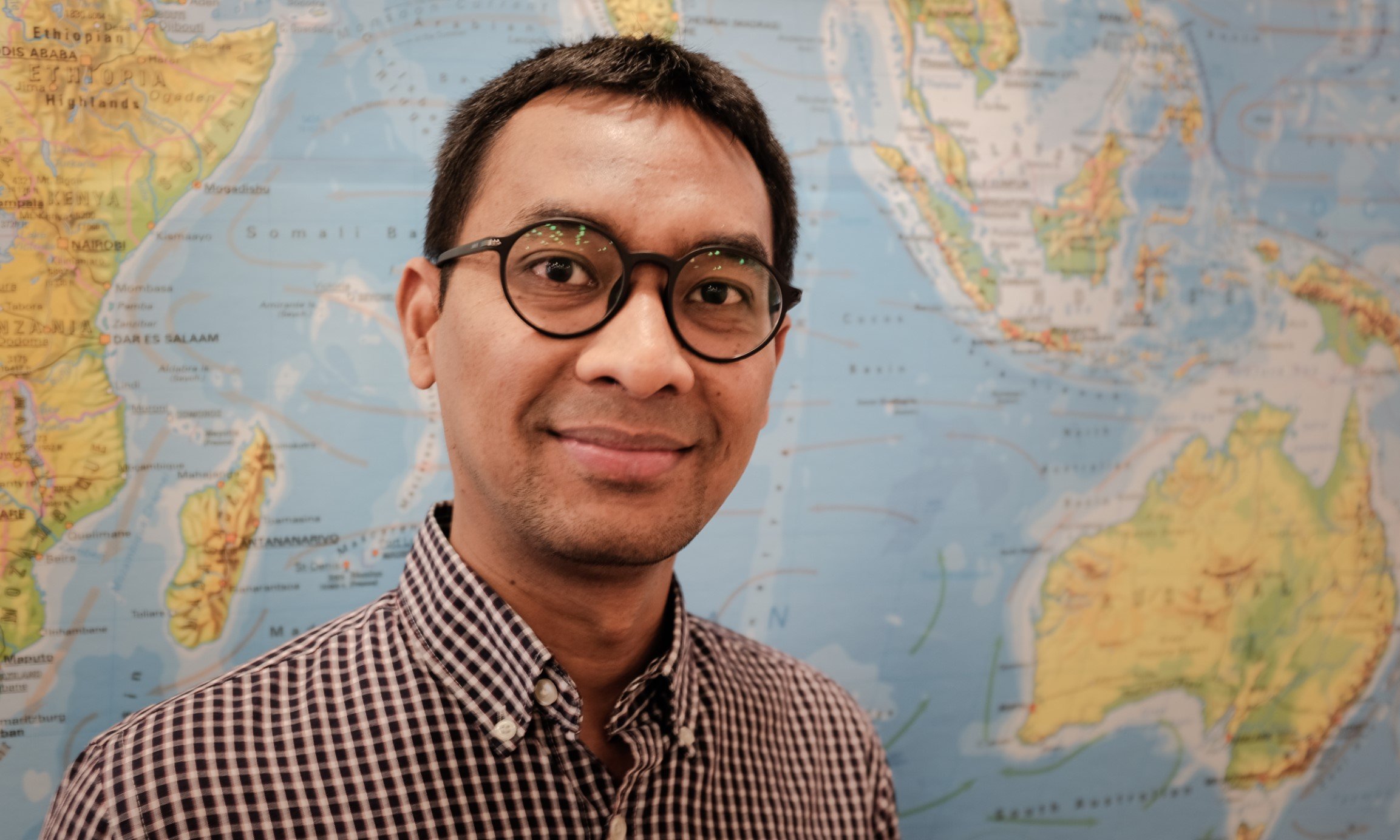 Dr Heri Kuswanto, an Associate Professor at the Institut Teknologi Sepuluh Nopember (ITS), is the lead author of the first study to look at the implications of Solar Radiation Modification(SRM) in Indonesia.

He and his team took a novel approach to assessing what impact stratospheric aerosol injection, or SAI, could have on offsetting climate change driven temperature changes over the Indonesian Maritime Continent. In this interview, Dr Kuswanto tells us about their research, the implications of their findings, and how he found himself working on SRM.

Tell us a little bit about your background and how you came to work on climate science?

I was always interested in mathematics at school but had a particular interest in statistics for supporting decision making. This led me to undergraduate and master’s degrees in Statistics in Indonesia and a PhD in Statistics in Germany. After this, I spent a year as a Postdoctoral Research Associate in Canada, and it was here that I first started working on climate change. I combined my statistical expertise with my newfound understanding of climate-weather systems and developed a method for calibrating ensemble forecasts to improve weather prediction in Indonesia, as it was very poor at the time.

And how did you go from that to becoming interested in SRM? Is the research different to climate research?

It wasn’t until 2018 when I saw a reference to the DECIMALS [now Degrees Modelling Fund] programme on a website for research grants. It made me curious about SRM and after some research, I realised that it includes a wide range of unusual and sophisticated technologies with potentially important impacts. So, I decided to put together a research team and apply for a DECIMALS grant to look at the implications of SRM for Indonesia.

SRM research is of course closely related to climate research although we don’t really deal with the climate system per se, or climate modelling. We leave that to the climatologists. But we did need a climate modeller on the team to run the SRM experiments, generate the future projections from the climate dataset and understand local climate conditions. There was a lot of data involved in this study – so we also had similar requirements for a very high-speed computer to run the statistical downscaling and bias correction work.

How easy was it to put together a team? Are there many people working on SRM in Indonesia?

Our team is the first to have looked at SRM in Indonesia, so it wasn’t easy to find people with the right expertise. But we put together a great team with the knowledge we needed in climate, weather research, earth system modelling, statistical downscaling, bias correction, and impact assessment. We now have team members from Malaysia and Vietnam, and one of the other DECIMALS funded teams is from the Philippines, so capacity for SRM research in our region is improving, in large part thanks to the DECIMALS programme.

How did you decide what you wanted to study?

Indonesia is a densely populated archipelago of islands that are vulnerable to coastal flooding, tropical storms, wildfires, and drought. Already the annual means of daily maximum and minimum temperatures have increased significantly – by 0.18°C and 0.30°C per decade respectively – and livelihoods are already being affected. Climate projections suggest impacts will only get worse with the IPCC 5th Assessment report concluding temperature could rise by 2.5°C or more by 2050.

SRM has been proposed as one option for temporarily combating global warming but before deploying such technologies we obviously need to understand what their impacts might be. So far, most SRM research has been focused on global impacts and undertaken by scientists in the Global North. We wanted to provide a Global South perspective on what the regional and local impacts of climate change might be on the broader Indonesian Maritime Continent, and to understand how stratospheric sulphate aerosol injection might affect these.

Your research included a lot of complex modelling work – downscaling and bias-correction of Earth System Models was obviously a key element. Why was this so important?

Most previous studies of climate change in Indonesia, and all studies that have drawn conclusions about the impact of SRM, have used Earth System Models (ESM’s). In a land of islands like Indonesia, the resolution of these is too coarse to explain local climate characteristics. You can imagine if the whole region is represented only with a few grids, it will generalise the impacts over areas that might be affected differently. So instead, we applied statistical downscaling and bias correction methods to the large-scale information produced by the models and produced high-resolution regional climate data that was better at capturing local patterns.  We used three ESM’s and assessed future climate change under the RCP 4.5 climate scenario, and a combined RCP4.5 and SAI scenario. Temperatures were our focus for this first study because it is generally more homogenous across the country than rainfall.

There was a lot of interesting detail in your results about both projected climate change in the region and the effects of SAI on these changes. What did you find and were there any surprises?

Overall, our analysis found that under the G4 deployment scenario, SAI would reduce mean temperature and the magnitude of temperature extremes, with a bigger impact over land than ocean.  Indonesia has three climate zones defined by rainfall patterns and we were expecting to see different impacts between these zones. But to our surprise we didn’t – perhaps because we were looking at temperature, although we did see considerable variability of climate impacts across different parts of Indonesia.

For our investigation period (2020-2069) all three models showed that SAI could keep the mean temperature rise across Indonesia to within 0.5°-1.0°C and that it would be lower than would otherwise have occurred without SAI.  But of course, when SRM is switched off in the model, the temperature rebounds quickly. This “termination shock” effect is well understood from other SRM research projects.

We saw more geographical variation in temperature extremes.  For some regions there was little difference between scenarios: in South Sumatra, West Java and South Sulawesi for example, SAI increased the daily maximum temperature by 0.3-0.5C. In others – like some of our more heavily forested areas like Jambi, South Sumatra, and South Kalimantan, we saw an increase of up to 1.0 C, and this we would like to investigate further, particularly as these areas are already classed as being a high fire risk. We saw the opposite over Papua and Nusa Tenggara where the daily maximum temperature extreme was reduced to below the historical period average. Here the warm spell duration was also shortened by 1-2 days, which is interesting as it suggests a reduction in drought risk for these areas. As we saw with mean temperature, once SAI was terminated, the frequency of these extreme events increased.

We also investigated changes in relative humidity and wet bulb temperature (WBT) as these are important determinants of climate change health impacts. WBT is the lowest temperature to which the surrounding air can be cooled down through the evaporation of water; a metric of high importance to study for instance the potential health impacts of a high-humidity high-temperature environment. With WBT, 27C or above is the threshold at which serious health problems occur, and at the moment, these are rare events averaging 0-1 a year.  All three of the models showed relatively small changes in both measures under the climate change only and SAI scenarios. With SAI deployment the relative humidity over land increased by 1-5%, although we found there was geographical variation, with Java, Bali, and Nusa Tenggara for example, becoming more humid, and West Java (currently the most humid part of Java) becoming less humid.  All our models consistently showed the average number of days above 27C will increase under the climate change scenario (one model projected by as much as 15 or more days a year), but SAI could reduce them to less than five a year.

How do you see the results of your research being used?

We’ve also shown that the effects of SAI are spatially variable, and not all are positive. Obviously, this is only the first study, so we need to look at these things in more detail, but our results will, I hope, be a useful contribution to any decisions taken in the future about SRM deployment.

What are you planning for your next research project?

In our future work we would like to look in more detail at the climate change and SAI impacts we observed over the land and ocean as our results suggest there are significant differences. We also found that extreme temperature over fire spots was projected to be higher under SAI so I think it would be useful to take a different approach and run more simulations with high-resolution dynamic models to help us to get a better understanding of what might be happening here.

We didn’t look at the overall drivers of the climate system over the Indonesian Maritime Continent in this study so we would like to do this in the future. But for now, we will investigate the SRM impacts on hydrological extremes over Southeast Asia with colleagues in Malaysia and Vietnam, and I hope that this will lead to a collaboration with scientists from other fields such as health and agriculture.